You can’t talk about Saturn moving into Aquarius without mentioning the Grand Conjunction that will take place on Solstice, December 21. The Grand Conjunction marks the end of an era and the beginning a  new 20-year cycle.  This cycle is part of a greater one where the Grand Conjunctions happen every 20-years in the same element (Earth, Air, Water, Fire).  So, the last Grand Conjunction took place in Taurus, an Earth sign.  Now we will be experiencing this conjunction in Air signs going forward for the next 200 years.  Air is a very different element than Earth, which is about stability and concrete things.  Air is less tangible, fast-moving, and concerned with the cerebral.

Saturn enters Aquarius on December 17, where he is the co-ruler with his father, Uranus.  Saturn transits are never easy.  Saturn is known as the Lord of Time, the Lord of Karma, the Great Guru, and he isn’t interested in making or taking shortcuts.  He is all about the journey and he is the embodiment of that old adage that if something is worth doing, it’s worth doing well. This takes time and attention.

So, what is this journey about? Saturn in Aquarius is about progress, but that progress is gained through hard work and accountability.  Saturn made a brief entrée into Aquarius earlier this year that gave us an appetizer of things to come.  On March 21, 2020  – July 1, 2020, Saturn moved into the first few degrees of Aquarius (fixed air) and right away we experienced a lockdown on air travel due to the virus. So that meant that the airlines, airports, and travelers had to take on much greater accountability in order to open up air travel again; those restrictions and precautions are still in place today.

The last two times Saturn was in Aquarius were from February 6th, 1991, to May 21st, 1993, and from June 30th, 1993, to January 28th, 1994.  This was when Apartheid was dismantled in South Africa. If your birth date falls in either of those ranges, you’re experiencing your first Saturn return or are about to.  This is a mark of maturity; one of potentially three times in your life that Saturn will return to the exact degree it was at when you were born.

Saturn cycles are about 27 – 29 years in length and herald accomplishment and growth. Some of life’s most significant decision are made during challenging Saturn transits. Saturn helps us to determine and then focus on our personal best.  Whatever isn’t working for us will discarded or ripped away depending on where you are at in your cycle of maturity. So, you can either approach it the hard way… or the harder way.  Regardless, you will experience tremendous personal growth.

Jupiter will enter Aquarius on December 19 in preparation for the Grand Conjunction and will spend the next year in Aquarius. Jupiter is known as the Great Benefic.  Saturn is the Great Manifestor, but you will have to work for it and be patient. Saturn delivers on long-term plans and usually the results are greater and worth the wait and the work.

With Saturn in Aquarius with Jupiter for the next year he will continue to restrict, and Jupiter will continue to expand.  It may feel like two steps forward and three steps back, but it might also serve a greater purpose as we look to build innovative social structures that will address poverty, climate change, social inequity, and so many other issues that we have ignored or slapped bandages on.  These are such big and important issues that won’t be solved without Saturn’s hallmarks of hard work, integrity, and accountability.

Timing is everything! Saturn moving into Aquarius for the next two years and continuing the Grand Conjunctions in Air signs for the next 200 years is the dawning of a new Age; the Age of Aquarius. 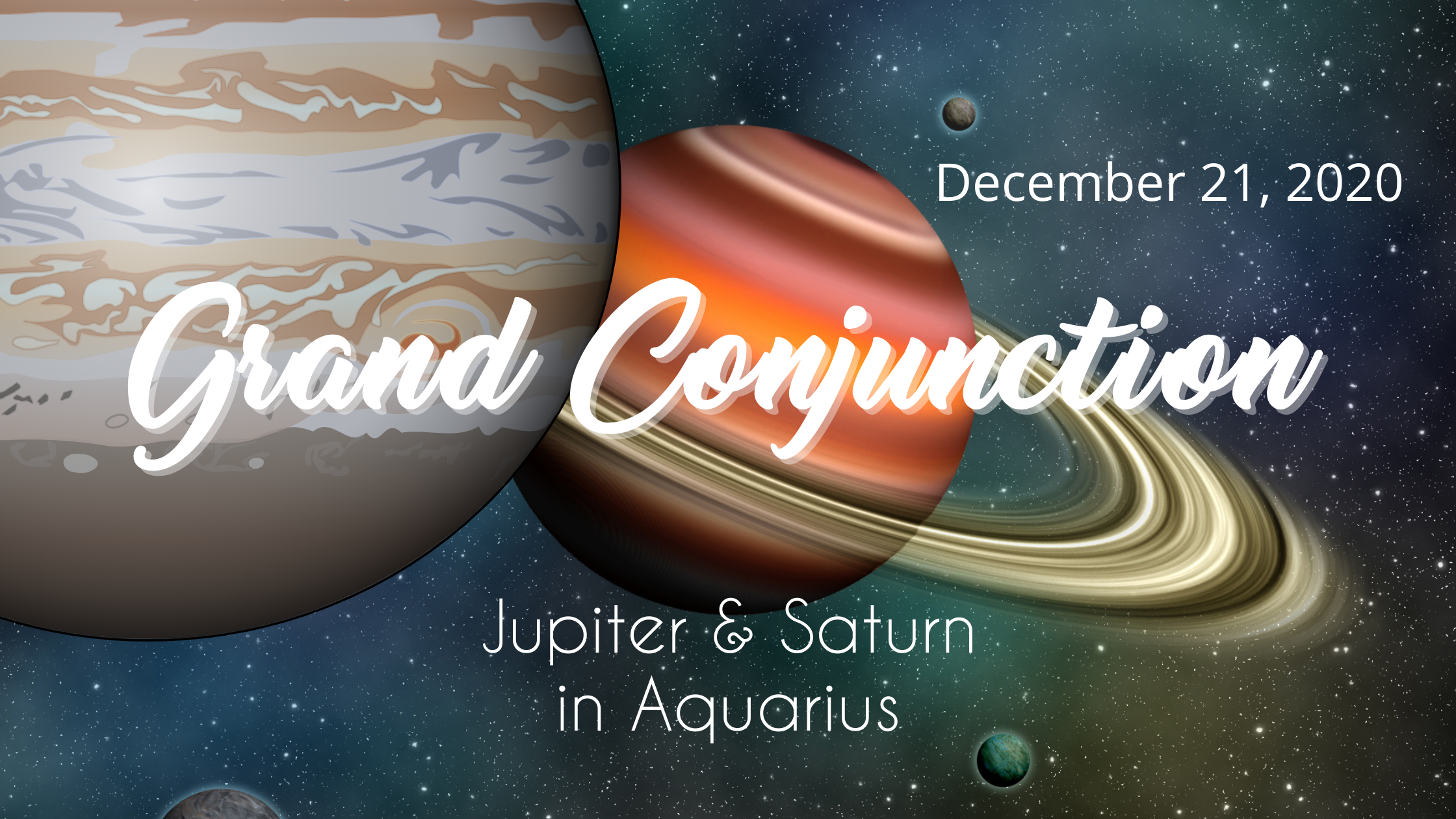 The last time Jupiter was in Aquarius was in 2009. Jupiter spends one year in each sign and as he gets ready to leave Capricorn on December 19, 2020 for Aquarius, he is only days away from a Grand Conjunction with Saturn on December 21. A conjunction is where two or more planets, or celestial objects, align at the same astrological degree.

Aquarius is the great humanitarian and has the energy of both Uranus and Saturn, as they are co-rulers of this progressive sign.  This will no doubt be a big change for all of us, as this sign is about the collective, not the individual. So, anyone that is used to being the center of attention will need to make room for others.   Even though Aquarius is the most “out-of-the-box” sign in the zodiac (Uranus) it is still a “fixed” sign (Saturn), which means that it might take a hot minute to get that box open.

Jupiter and Saturn provide great opportunities for achievement.  Jupiter expands energy and lends his generous and optimistic nature to giving you the courage you need to take a risk.  Saturn is the taskmaster that can fuel you to git’er done.  So, if you want to launch something, or take something to the next level this year could be perfect for that.

Obviously if you have an Aquarius Sun, Moon, Ascendant, or Midheaven this year will be filled with incredible energy, however that doesn’t leave anyone out.  Everyone has the energy of Aquarius in their chart.  Check out your natal chart and you can determine what house (area of life) that you can use the energy of this Grand Conjunction to your advantage.

It is typical for the Grand Conjunction to be heralded by a signature event.  So, keep an open mind, and expect the unexpected.