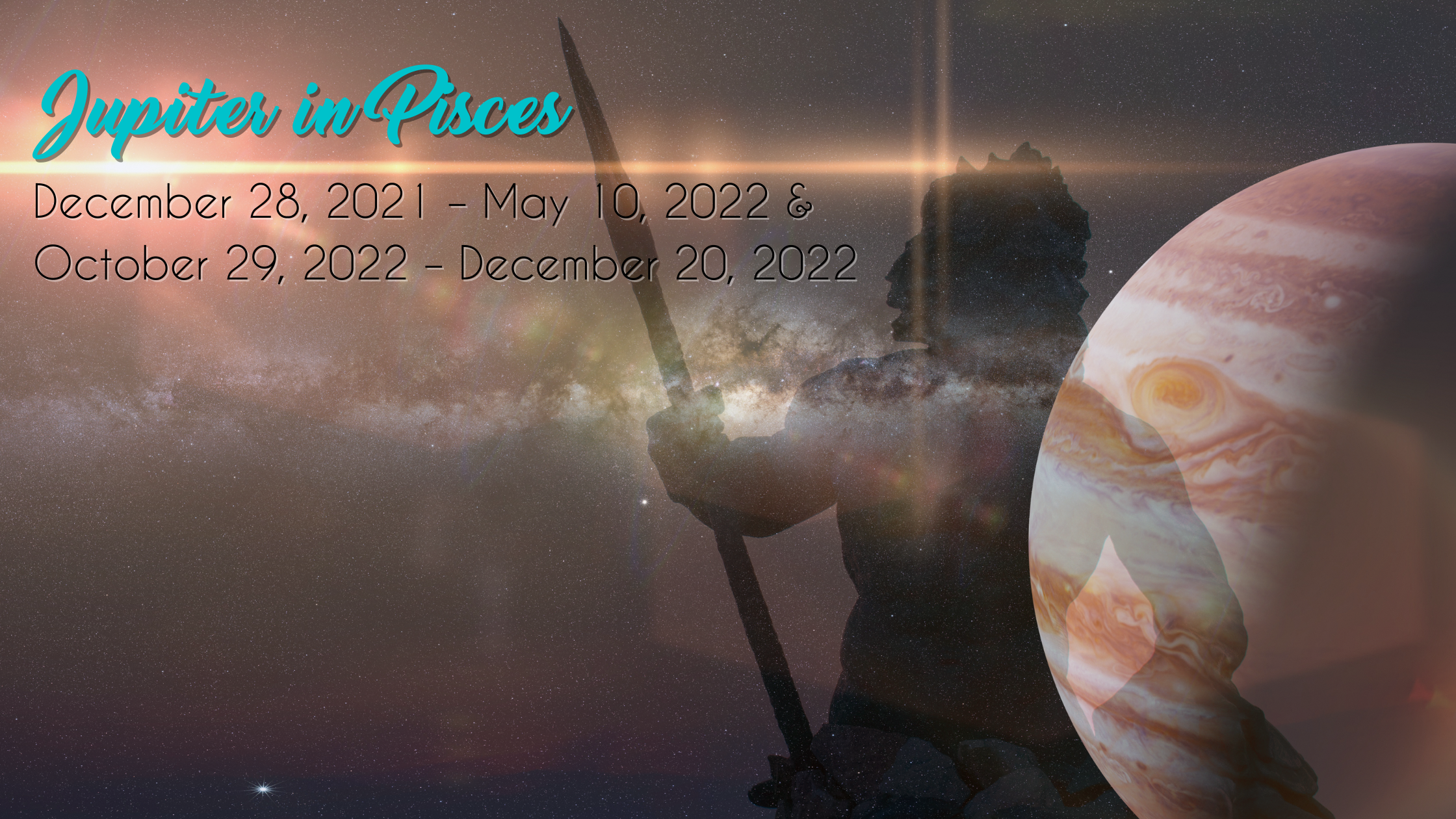 “Seize the moment. Remember all those women on the ‘Titanic’ that waved off the dessert cart.”

Typically, I don’t like to think about the movie Titanic, because my older brother looks quite a bit like Leonardo DiCaprio.  This probably sounds like a great problem to have; however, I avoid Mr. DiCaprio’s films because he always seems to die, or almost die, and I find it so difficult to watch.  When his character drowns (sorry, spoilers!) I felt like I was having a heart attack! I literally wanted to scream “Rose, move your ass over and let him up on that door!”  There was definitely room, amiright?

The titanic planet Jupiter entered Pisces (again) on the 28th of December 2021.  This expansive gas giant took a brief dip into the deeply spiritual world of Pisces from May 14, 2021 to July 29, 2021, but only made it as far as 2 degrees. However, that did give us a little preview of the first half of 2022.

The orbit of Jupiter typically means that he spends about 12 months in a sign, but since last year he seems to be fond of running through a sign in the first half of the year and previewing the next during the summer months.  Now he will be moving very swiftly through Pisces and then into Aries (5/11 – 10/28) for several months.

Jupiter is known as the “Great Benefic”.  He expands whatever he touches, and he rules the 9th house of knowledge and understanding. This is where it gets interesting…Jupiter is the ancient ruler of Pisces. Neptune is the “modern” ruler (since he was only discovered in the last 100 years).  So technically, Jupiter and Neptune co-rule the 12th house of Pisces, and guess what? They are going to be in Pisces at the same time and will exactly conjunct on April 12, 2022.  These two sailors will hold each other in thrall  (1 degree orb) from 4/7 – 4/17. These two only conjunct every 13 years and won’t be conjunct in their rulership again in our lifetime… so it’s time to plot your course.

With Jupiter transiting here for a significant portion of the year, we will definitely see the expansion of creativity.  Look and see what houses these signs rule in your chart and this will help you establish the themes of expansion for you in 2022. You can find out more about what part of your life is ruled by Pisces by plotting your Natal Chart for free at FoxyAstrology.com.

Pisces rules the 12th house, which is all about exploring your deepest dreams… but there can be a tendency to get lost in the deep, murky waters of the unconscious.  With Jupiter and Neptune in Pisces you could be lost in flights of fancy, living outside of the bounds of reality, or being caught between the devil and the deep blue sea.  It will be important to know when to drop anchor and plot a new course.

How do you make the most of this Jupiter cycle during his rulership?  Look and see what house is ruled by Pisces in your chart.  That is where you will feel the expansion in your life. This will be especially intense for anyone with their Sun, Moon, Ascendant, or North/South Nodes. If you have anything from 20 – 29 degrees of Pisces, or any of the other mutable signs (Gemini, Virgo, Sagittarius), or any of the other water signs (Cancer, Scorpio) you will really be able to creatively expand your life.  Everyone in the collective will benefit from this energy, but it is important to meet this energy with intention and action.

With the jovial vibe of Jupiter in Pisces, we can see the creation of more fantastical media, beautiful music, art, and poetry. Perhaps we will see people giving up everything to finally chase their dreams and get their “just desserts”.