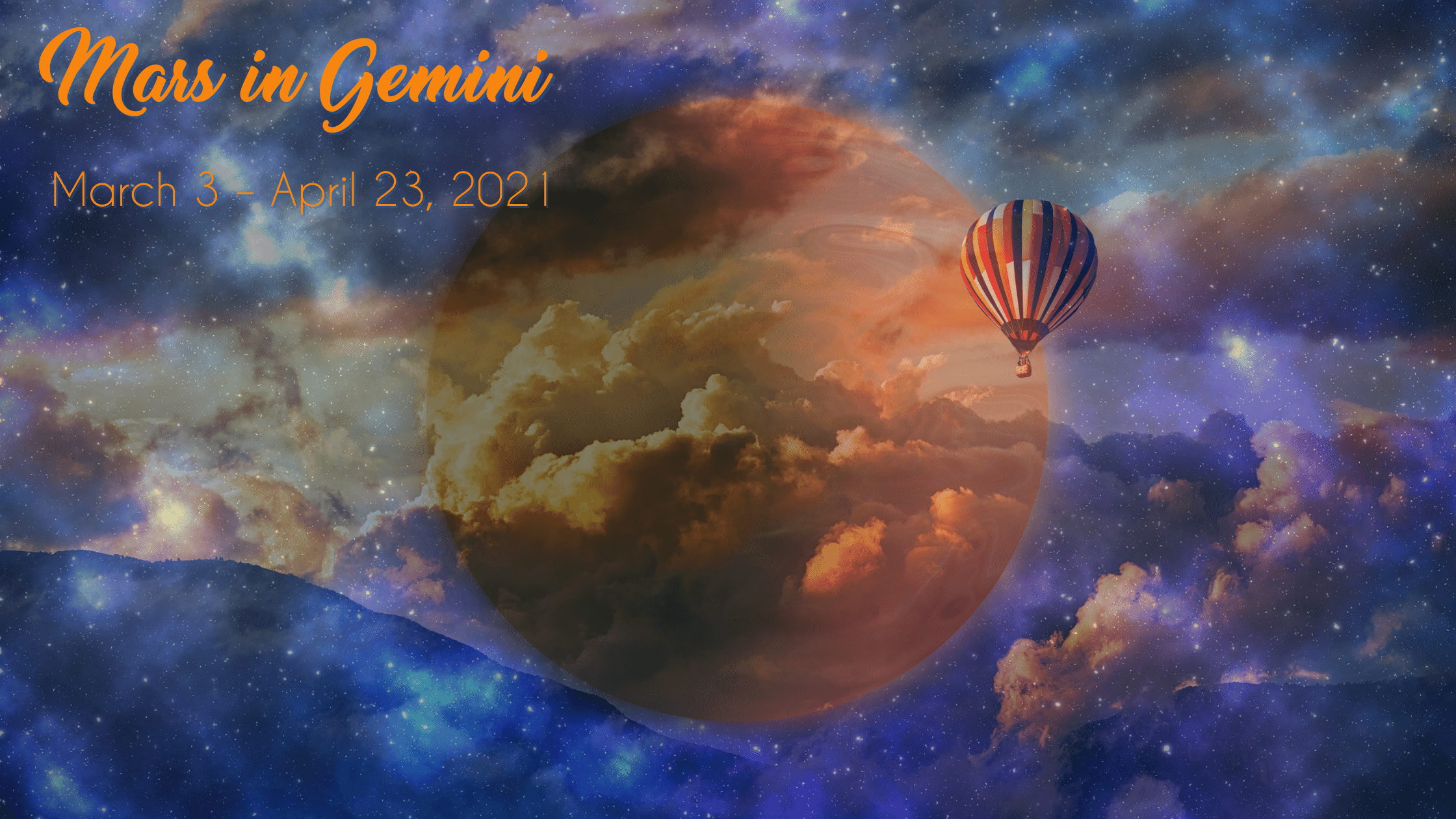 Get ready for bright ideas and brilliant conversations. Communication will be speeding up and flying free as Mars moves into Gemini. The last time that the warrior traveled through Gemini was in 2019.

Most recently, this passionate, feisty warrior spent six months transiting in his rulership of Aries (8/16/20 – 1/6/21). So, with his move into Taurus (fixed Earth) at the beginning of the year, we all may have gotten a bit bogged down with overindulgence. With Mars in the sign of the bull we sleep more, we eat more; we take our time.  But Mars is about passion, volatility, and urgency. So now that Mars is moving into Gemini (mutable air), get ready to fly.

Mars in mutable air is the passionate, chatty, social butterfly.  After all of this time in lockdown we can feel the winds of change. We want to get out and communicate and be in the world. Most likely, we will start to see the virus begin to ebb, and this will allow us the opportunity to get out there. It’s time for the discussions and interactions that we have put off or haven’t been able to get to for the last year.

There are some pitfalls to this new-found desire for interaction…you might actually have to shut up and listen. The need for you to get your point across could be so intense that you might forget that listening, understanding, and acknowledging is part of a conversation — probably the most important part.

Things will be coming at you fast and furiously; it is vital that you don’t forget to breathe. If you meet this energy with that same volatility…misunderstanding, anger, and hurt feelings could knock you off course.  Keep it light and don’t forget to listen to your heart… and to others’ words and intentions.

Below I have noted some important dates and aspects that might help you maneuver your way through the next month and a half.  If you want to fly, you need to know what you are about to navigate: 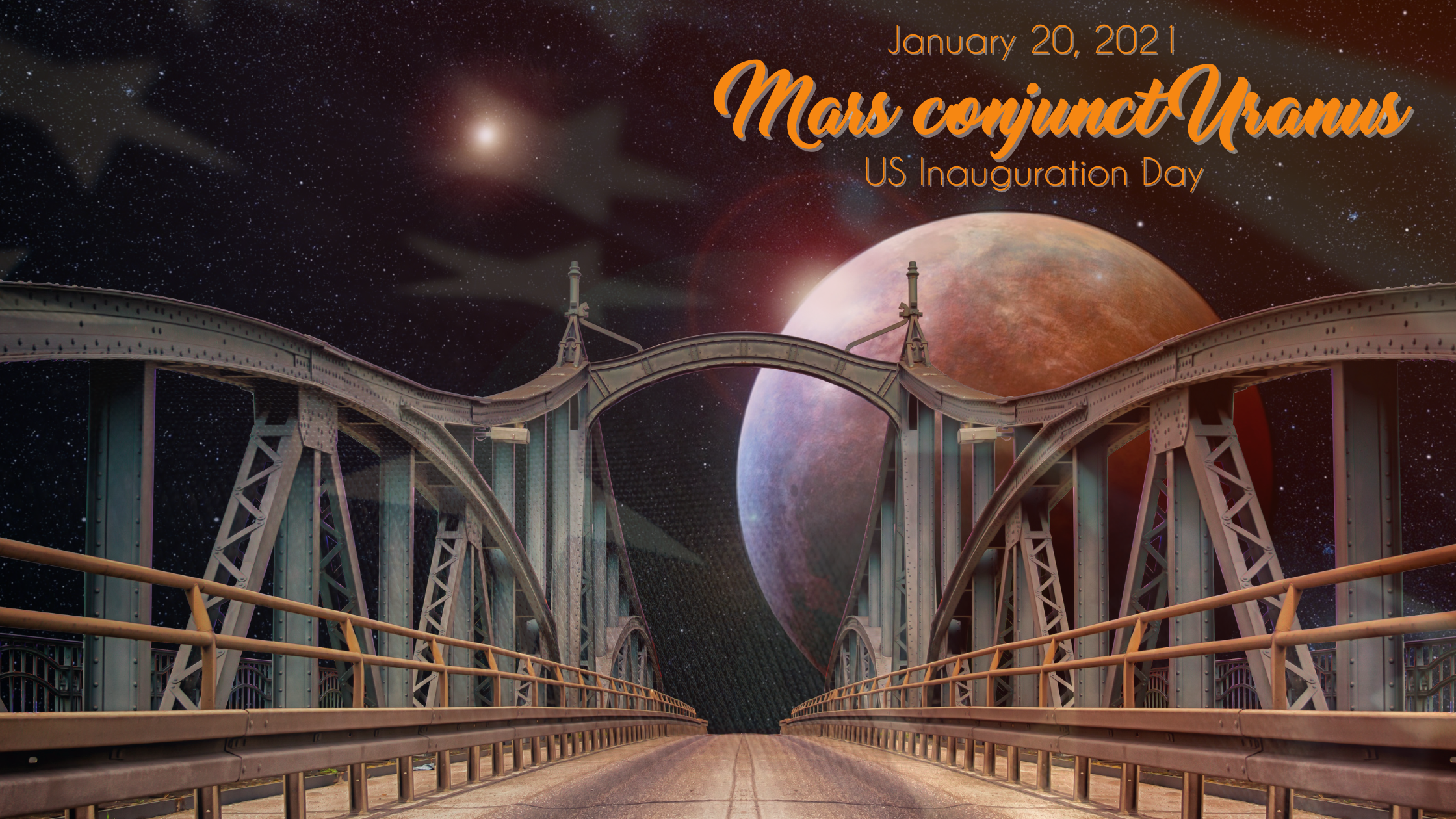 On Wednesday, January 20, at 12:00 pm EST, Joe Biden and Kamala Harris are scheduled to be sworn into the offices of President and Vice President of the United States of America.  Once they are sworn in they will assume the power of those respective offices.

About that same time Mars (6 degrees and 40 minutes) will be conjunct Uranus in Taurus (6 degrees and 44 minutes), not to mention that the Moon will be at the last degree of Aries (29 degrees) moving into Taurus and will be within a 7 degree orb of the conjunction of these two powerful planets.

This conjunction happens every other year and often brings perilous conditions. Mars is a warrior, ready for battle and Uranus is the unpredictable changemaker.  Literally Uranus is known to make things shake and quake, and in the earth sign of Taurus chances are this conjunction could lead to explosive and eruptive behavior and/or events.  Add in the Moon at the last degree of Aries, which is a critical degree (meaning the Moon is strengthened and therefore more powerful) adding to the fiery emotions of that Cardinal sign.

This is especially tenuous since this conjunction in Taurus will be squaring the Sun (0 degrees), Saturn (3 degrees), and Jupiter (7 degrees) in Aquarius.  Also, the North Node (our future collective destiny) of the United States, is in Leo and squares this Mars/Uranus conjunction that involves the Moon (the Moon rules Cancer and the US is a Cancer Sun sign).  So many intense aspects are aligning, as we are head into our country’s Pluto Return (2022-2024). We are already feeling the effects, but these will come to a pinnacle during this Biden Presidency.

If that isn’t stacking the deck for unforeseen obstacles and events, then consider that almost every President in US history that was elected near the Jupiter/Saturn Conjunction was either assassinated, survived an attempted assassination, or died in office.  Astrologer Marjorie Orr has a very insightful article if you want to learn more and study the charts of these events through history.

I think anyone that is brave enough, or crazy enough, to take on the office of the President of the United States of America is in for tremendous, transformative ride for the next four years. It certainly won’t be boring.