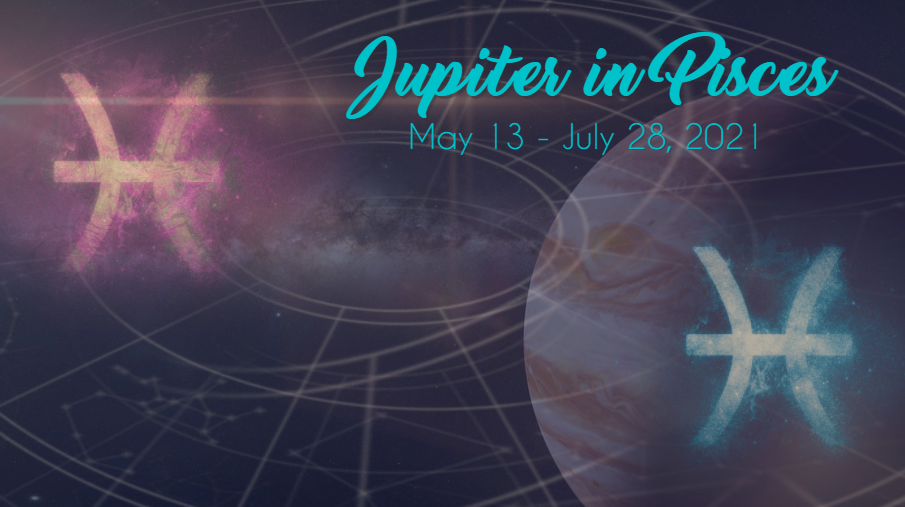 Want to know your future?  Sure, you do.  Well, you are in luck because on May 13, Jupiter will enter Pisces for two and a half months; during this time, you will get a ‘sneak peek’ of what he will have in store for you in 2022.

Jupiter moving into another sign in the middle of the year is rather unusual since Jupiter has a 12 year orbit, spending about one year in each zodiac sign.  However, he has literally sprinted through the sign of Aquarius this year and is preparing to take a dive into the ethereal waters of his ancient rulership, Pisces. The modern-day ruler is Neptune, who is also currently moving through Pisces and is in the last ten degrees of a sign.  Neptune is also getting ready to go retrograde (Rx) on June 25 – December 1.  Having both of these planets in rulership at the same time makes Pisces super-powered!

Let’s Talk about the Big Guy, Shall We?

That’s right – if you hadn’t already guessed it, Jupiter is the largest planet in our Solar System — dwarfed only by the Sun.  The last time Jupiter was in Pisces was during 2010.  You might think back to that time and see if you are experiencing any echoes from the past. What was going on in your life in 2010? What did you do for work? Where did you live? Who was in you daily life?

Jupiter is known as the ‘Great Benefic,’ and generally expands whatever he touches. This can lead to more money, more fun, even more beauty. However, if he is moving through the sign of your Sun, Moon, or Ascendant he can also expand your waistline and your spending.  Generally, though, he is thought to be a bringer of luck and good fortune.

It is important that you know which house in your chart is ruled by Pisces. Pisces is the last sign in the Zodiac, and he inhabits the 12th house.

The 9th house (Sagittarius) is where Jupiter is thought to rule supreme, but in the 12th house with Neptune…get ready for your wildest dreams to get even wilder. You will also have many opportunities to expand your spiritual (and even psychic) development.

This two and a half month window will particularly impact anyone with any placements in the early degrees of Pisces, and also any of the other Mutable signs: Gemini, Virgo, Sagittarius.  You will definitely feel the benefit if you have anything in the early degrees of the other water signs — like Cancer and Scorpio, which will trine Jupiter.  Also, early  in the earth signs of Taurus or Capricorn since that energy will be sextile Jupiter in Pisces.

Jupiter in Pisces is the perfect time to explore the metaphysical, the spiritual, and anything relating to creativity and imagination.  So, sort out your houses, and be prepared for the preview of a lifetime.